Who are the Natural Colored Sheep Growers?

For many years, sheep producers around the world have maintained exotic, rare, and colored breeds of sheep. These animals are the genetic roots of today’s natural colored sheep.

Australia is one of the leading producers of sheep in the world and it is not surprising that natural colored sheep producers in Australia have formed four associations or societies with over 2000 members.

In North America, sheep breeders have developed and maintained natural colored flocks in for well over 30 years. In 1974 the first Black Sheep Newsletter was published to satisfy the growing demand for information and communication between natural colored sheep breeders. Sachiye Jones, the BSN editor, was overwhelmed at the enthusiasm, interest and rapid growth of her publication. 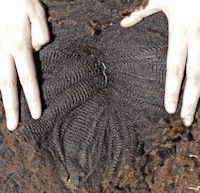 NCWGA was established to fulfill the needs of sheep breeders developing colored wools:

Some of the practical advantages of forming an association are:

Why A Separate Newsletter?

Paralleling the development of the Black Sheep Newsletter, the Natural Colored Wool Growers Association also experienced tremendous interest and rapid growth. The rapid growth made it necessary to form separate regions and districts. The idea was to develop greater efficiency, closer ties with members, and a larger pool of developmental ideas.

What Has The Natural Colored Wool Growers Association Accomplished?

Regional Directors across the US and Canada are bringing together colored sheep breeders through meetings, fleece quality workshops, sheep shows, fiber festivals, and demonstrations to improve the quality of our product for the consumer.

What Are The Benefits To Members?

Our MISSION is to assist NCWGA members in the improvement, promotion, development of naturally colored sheep and the colored wool they produce. In 1977, NCWGA was formed as a non-profit national organization to support these common goals.

The growth and popularity of hand spinning, weaving, felting and other wool crafts have resulted in a demand for the wide variety of naturally-colored wool. No Dyes Needed. The Modern handcrafters and fiber artists are more knowledgeable, discriminating, and demand higher-quality fleeces than those required by the textile industry. Since 1977 NCWGA has recognized the need for high-quality wool sheep that produced a high quality and very useable product.

© NCWGA – A web solution by CHVentures